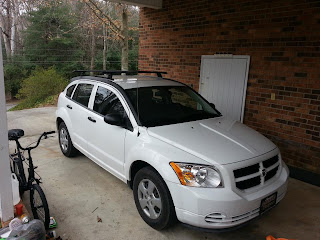 My son came over today to help me drill holes in the roof to add a set of tracks from Proline.  The tracks were about $50 and will allow me to use my old Yakima racks that have served me through several cars.

I decided to reuse them instead of buying new racks because they are still in great shape.  If later I choose to spend several hundred dollars to upgrade to wider Thule racks I can get ones that fit these rack tracks.

It took about an hour after I went to the sotre to buy new drill bits.  Unfortunately they were having a tools sale so I bought more than just the bits. 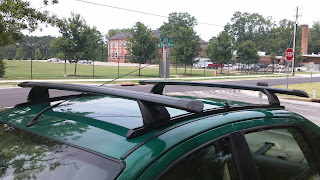 The racks can be removed in about two minutes but the tracks are now a permanent part of the roof.  I think it looks good on this car.  Even better than it did on the old Focus. 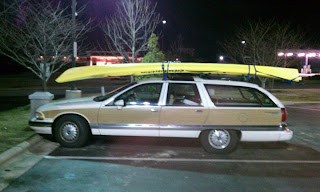 Maybe the is even better looking on this new car than it was on the old Buick Roadmaster.  The new Caliber hauls gear more like the Buick Roadmaster. Get fuel mileage like the Focus, and with 7 inches of ground clearance handles dirt roads and trails better than either of them.
No comments: