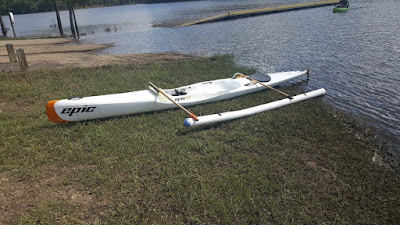 As some of you may have noticed I've not been paddling as much as I should these days.  With work, family and friend commitments there has been little time set aside for the important paddling.  This dry season peaked in July.  In the first week of August  family and friends were either better or in a better place, I went paddling and realized I had not paddled for the entire month of July.  This has not happened before in more than a decade so I was quite surprised by the discover.  I also noticed an extreme lack of fitness and capability. In addition I think my boats are now a little to small and the fit is too snug. So snug in fact that breathing deeply is inhibited.  However, I'm at it again and really enjoying it.  I've added and out rigger to my most comfortable boat to help compensate for the lack of balance and I'm having a great time with it.  I think in the future I'll try to keep paddling in in its proper place so that I paddle at least 4 times a month and sometimes 4 times in a week.

As you can see the outrigger is home built. The tough part has been molding the bracket between the Aka and the front deck.  The PVC outrigger has a kink in the top but the bottom is fair and I have a plan to make the next one even better. It's going to be a wonderful fall!
No comments: